Condensers were used to generate pronounceable, rugged and checkable five- and 10-letter code words for figure sequences assembled from figure codes. It was cheaper to wire words than to wire numbers; moreover, figures were (or were said to be) more vulnerable to mutilation than words.

Finally, figure codes were well suited to complex private codes involving ergodic (step-by-step) protocols of message generation and unpacking. The 0-9 and 00-99 possibilities of each position and position-pair were suited to methodical presentation of message molecules — typically located in tables, to which one would turn in ordered sequences. Coding was already trying enough, without worrying at this level about cv vc and dangerous letter-pair issues. The condensers came into play after initial coding into figures was done: these were converted, step by step, into letter pairs and triads in the forms vc or cv, vcv or cvc, cvv or vvc, yielding 5L and 10L codewords.

Condensers could also be used to super-encrypt messages generated by standard 5L and other codes for which figures were provided for each phrase or message molecule.

There was no semantic dimension to the condensers: they were dedicated solely to the generation of unique codewords satisfying Telegraph Administration rules about pronounceability and length. Those artificial words were symbols referring only to a series of figures; they might echo or resemble actual dictionary words, but only accidentally. They are not the stuff of poetry, unless it be of the dada version, which they certainly parallel and even predate. Their euphony in combination with the absence of semantic intentionality together locate them uncertainly in the realm of conlangs (constructed languages).

Because the cypher (alphabet) groups in condensers were generated quite systematically — and generally avoided unsafe letter combinations — they overlap in some ways to mutilation tables.

This page is hardly begun, only gathering entries from a now-defunct blog. As it expands in coming weeks, it will examine condensers available as separate books and as components of figure codes, and also several patents for condensers.

Consider the simple 10 figure / 10 letter condenser provided by the Westinghouse Code, published in 1902. 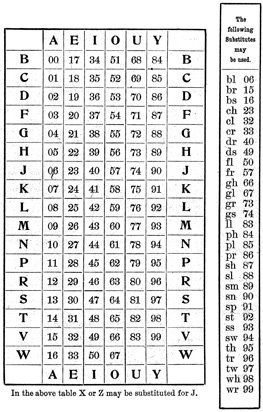 An explanation of the condenser on page xv provides these examples of artificial and suitably euphonious 10L words : egvocoudan, acapibilty, and epirrabado. The table on page xvi (shown above) provides a consonant-vowel equivalent for every figure 00-99. The code is indifferent about cv or vc order : one might reverse as required to achieve euphony. A column of substitute letter pairs is also provided for 31 figures, to afford a more euphonious construction of the transmitted word. How might this work? An example is 2312480025 / jeratibale, which might be written Charitable. There is no concern about mistaking a condenser code word for others in the code: Condenser words can be recognized easily because they contain ten letters, versus no more than nine letters for other codewords in the book.

No provision is made for checking — more elaborate condensers might, for example, use the order of cv and vc syllables to indicate something about the codeword. Some other discussion of the Westinghouse Code can be found here.

I include it here because it might have been used as a condenser.

From the above —
In transmitting—suppose it is desired to send two sentences or words of which the code numbers are 93804 and 132601 — first find the number 04 in scale a, then turn scale c till the number 38 upon it comes in line with 04 in scale a and then turn scale d so that any 9 upon it comes in the same line. This gives the word Neyam. Similarly, by turning the scales c and d till 26 and any 13 are in line with 01 we get Sekad and adding this to the former word we get Neyamsekad which can be cabled for the price of one word.

I have neglected condensers because they do not have a semantic dimension. They are solely concerned with reducing a sequence of figures to a safe sequence of letters, often pronounceable by exhibiting a vowel-consonant or consonant-vowel order, and offering some means of error checking. Why letters? Because letters (and pronounceable syllables and words) held up better in transit through telegraph operators and poor cable conditions, and because they offered potentially 26 symbols for every position, versus only 10 for figures (ordinarily, figures were not sent as such, but as codewords).

Condensers took several forms : tables, tables converted to slide-rule and even wheel form, and mechanical devices. Their compilers were encouraged by the International Telegraphic Convention of 1903, where a telegraphic word was defined as being a pronounceable combination of not more than ten letters. An earlier prompting had been the publication in 1894 of the Official Vocabulary for Telegrams in Preconcerted Language, prepared by the International Telegraph Office in Berne. Every codeword in that volume was numbered : 000000 / Aabam to 213949 / Zythogala.

The numbering of the words in the official vocabulary introduced a new element in codistics i.e. codistic science as far as the term applies here... This important evolution caused the birth of figure codes which were combined with and assisted by the vocabulary as code condenser. (C. B. Barto, Economy and Technique of Codes and Code-Condensers, 1934 : 10.)

From the Preface — This book contains 1 million words of 5 letters (half-words) with as many groups of 6 figures.

The first 2 letters and first 2 figures are arranged to the left of the vertical separation line, and the next 3 letters with their 4 figures to the right of it, on the same page. The pages with the blue margin contain the halfwords beginning with a vowel and those with the red margin the half-words beginning with a consonant. As all of these halfwords can be prefixed as well as affixed to each others, this produces 1 million x 1 million = 1 000 000 000 000 of pronounceable, complete words of 10 letters with as many groups of 12 figures.

These words are in strict accordance with the decisions of the London Telegraphy Conference of 1903, and are officially admissible.

A single example codeword and figure is placed at the bottom of each page in the Vollers condenser:

Not all condensers took the form shown above in the Vollers example. Others were simpler lists of letter pairs and triads; one also encounters examples of (and/or patents for) condensers in sliderule, wheel and mechanical forms.

More from the Preface —

The following letter groups do not occur in the full words of 10 letters, which precludes any doubts regarding their easy proncounceability:

The first 2 letters of the halfwords, i.e., the syllables to the left of the separation line, vary on each of the 12 pages, as it was necessary to select only such syllables as would form easily proncounceable half-words in conjunction with the next 3 letters.

Condensers are closer to, or lend themselves, to encryption, and it comes as no surprise that one of the key patents in cryptography — one of the steps on the way to the Enigma machine — shows the wheel encryption device attached to a Remington #10 typewriting machine bearing a Western Union Cablegram blank. The link between typewriting and computing was not the keyboard, but automatic printing telegraphy and the introduction of mechanical condensers.