teleseme, spoonless; the hand flies back when your want is known 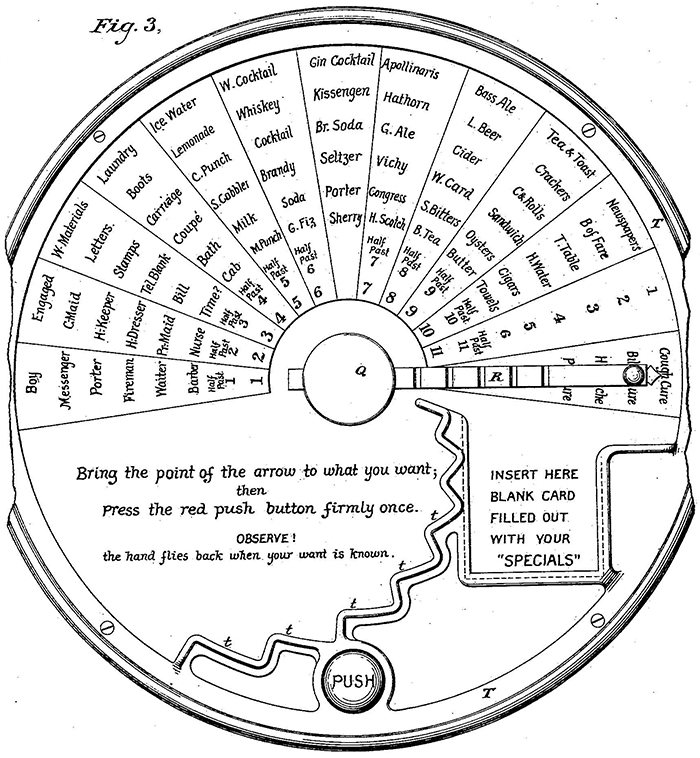 In room No. 514 of the Hotel Victoria, Miss Helen Spencer stood regarding the teleseme helplessly. It seemed to her that everything she did not want, from a newspaper to a laundress, was at her disposal merely by turning an indicator, but the only thing she did want, and that so small a thing — merely a teaspoon — was not, apparently, available. By reason of her advancing years, she required her spectacles, and she peered more insistently at the unsatisfactory list of offerings. At last she found what she was looking for, and set the indicator at “tea.”
When the tea was served Miss Helen sat down to enjoy it as only a tired woman, arriving at a strange hotel late at night, can enjoy it. On her way home from a visit to relatives in a southern state, Miss Spencer was nearly at the end of her journey, and her thoughts were pleasantly occupied with the anticipations of her arrival home on the morrow. Oliver would be there for the long vacation, and Miss Spencer was very fond of her nephew. Although he had a boy’s love of fun, and loved to tease his stately aunt, he was a dear boy, after all, and she greatly enjoyed his visits.
“There!” exclaimed Miss Helen, as she involuntarily gave a slight cough, “I was sure that bronchial trouble would come back again just as soon as I came north. I am glad I had that prescription refilled before I left Asheville, and I think I ’ll take a half-teaspoonful right now.” Puttering around in her big satchel, she soon found the bottle of medicine, but a thorough search failed to reveal its accompanying teaspoon.
“I am sure I put that teaspoon in,” mused Miss Helen, as she tossed the various arcticles from the bag, “but I suppose I must have left it at Maria’s. I must write to her about it, for it was one of the Grandmother Mitchell set. Meanwhile I shall have to use this one which came up with the tea, though I do hate plated silver.”
Next morning, as Miss Spencer paid her bill at the desk, she showed to the smiling clerk the teaspoon which she had brought from her room. “I want this,” she said in her straightforward fashion. “I want to buy it of you. I find I have no spoon with me, and as I have to take medicine at intervals through the day, I shall need one.”
“Certainly, madam;” and the transaction was satisfactorily completed. The first time Miss Spencer had occasion to use th spoon on the train, she idly examined it. It was of plain Colonial pattern and conspicuously engraved with the words “Hotel Victoria.”
As she noticed this she remembered having read somewhere a newspaper account of a woman who “collected” souvenir spoons at hotels and thereby got into serious difficulties. It passed through Miss Helen’s mind that any one seeing this spoon in her possession might think that she had unlawfully appropriated it. Chancing to look up at that moment, she saw the lady in the chair next to her own looking sharply at the spoon. Unreasonably embarrassed, Miss Spencer flused hotly, and, acting on the impuse of the moment, hastily slipped the spoon into her bag, which she closed with a nervous snap. At this, her neighbor looked hersquarely in the face, and smiled broadly, with an expression unmistakable in its mieaning.
“She thinks I stole it!” thought Miss Helen, and a look of horror crept into her eyes, while a wave of righteous indignation surged through her whole being. But all this only had the effect of making her appear more guiltily embarrassed than ever. An impulse seized her to explain to her intrustive neighbor that she had bought the spoon and paid for it, but her haughty pride would not allow her to do anything so undignified; so she sat and suffed in silence, staring out of the window till her eyes ached.
She laid the spoon down on the marble wash-stand, and, turning to adjust her veil, was surprised to hear a soft Southern darky voice saying, “Is dis ‘here yoh spoon, mis’?”
For some occult reason, Miss Helen was even more loath to admit a proprietary interest in this reprehensible spoon to the gentle black girl than she had been to her supercilious Pullman neighbor.
“I bought it,” she said, involuntarily explanatory, “from the Hotel Victoria — to take some medicine with — on the car —”
“Yassum,” said the maid.
Inexplicably, Miss Helen felt more embarrassed by this calm acquiescence than she had by the powerfully expressed doubt of her first critic. It was this psychological conviction that prompted Miss Helen to give the maid an extra half-dollar, and it was a revulsion from this psychological suggestion that made her regret it afterward.
“Suppose,” thought Miss Helen, “that she imagined I was bribing her to keep still about that spoon! — and well she might!”

Carolyn Wells (1862-1942) — known for her mystery fiction (including the Fleming Stone detective stories), but wrote much else besides (including poetry, humor, nonsense); her collection of Walt Whitman poetry now at LoC. Deaf.
wikipedia

aside —
the inclusion of the “gentle black girl,” her ”Southern darky voice” and its “Yassum” — there’ve been some other Blacks in these putterings; will want to review their appearances.