a circle that cannot be quite squared

“I must hurry back to my own shack,” said Mamise, rising.
“You stay right where you are. You’re goin’ to eat with us.”
“Not to-night, thanks, dear.”
She kept no servants of her own. She enjoyed the circumstance of getting her meals. She was camping out in her shanty. To-night she wanted to be busy about something especially about a kitchen — the machine-shop of the woman who wants to be puttering at something.
She was dismally lonely, but she was not equal to a supper at Jake’s. She would have liked a few children of her own, but whe was glad that she did not own the Nuddle children, especially the elder two.

ex The Cup of Fury : A Novel of Cities and Shipyards, by Rupert Hughes; Illustrated by Henry Raleigh (1919) : 211 : link (Cornell copy, one of several via hathitrust)

The book was made into a film : wikipedia : link
and is synopsized (and criticized) in Frederick Palmer and Eric Howard, Photoplay Plot Encyclopedia (1920) : 78 : link 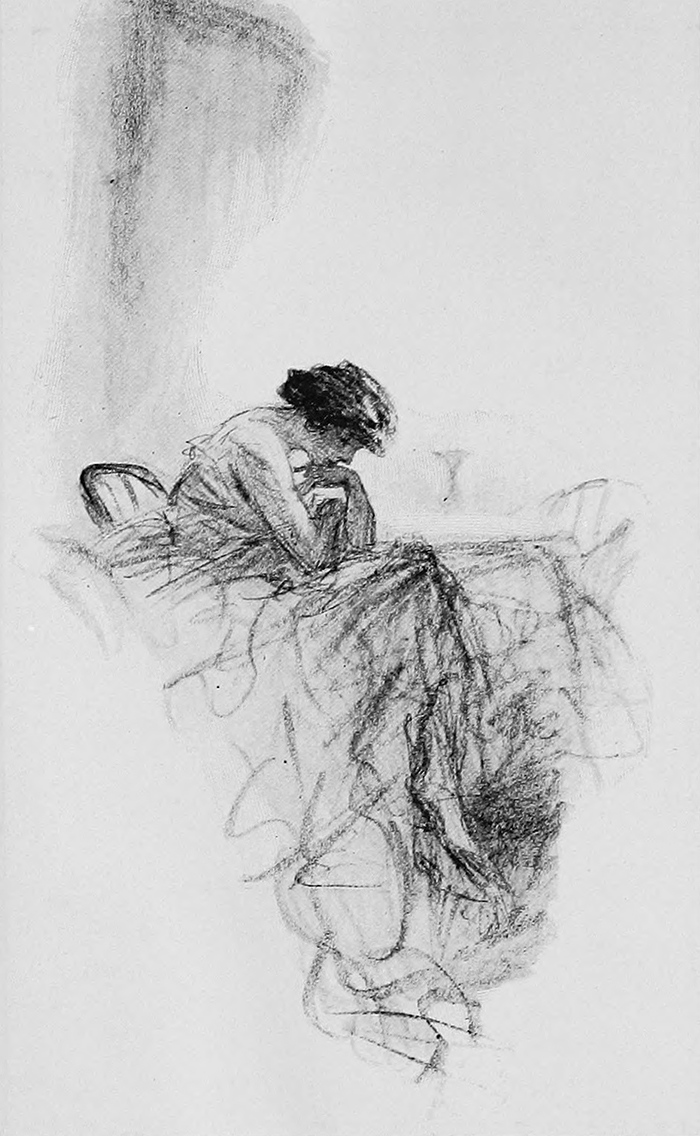 frontispiece, captioned —
“It would be nice to be married,” Marie Louise reflected, “if one could stay single at the same time.”

pertaining to this passage —

She sighed “Good night!” and wished she were not so cantankerous. The closing of the door shook her whole frame, and she made a step forward to call him back, but sank into a chair instead, worn out with the general unsatisfactoriness of life, the complicated mathematical problem that never comes out even. Marriage is a circle that cannot be quite squared.
She sat droopily in her chair for a long while, pondering mankind and womankind and their mutual dependence and incompatibility. It would be nice to be married if one could stay single at the same time. But it was hopelessly impossible to eat your cake and have it, too.
Abbie, watching from her window and not knowing that Davidge had gone, imagined all sorts of things and wished that her wild sister would marry and settle down. And yet she wished that she herself had stayed single, for the children were a torment, and of her husband she could only say that she did not know whether he bothered her the more when he was away or when he was at home.
When Davidge left Mamise he looked back at the lonely [236] cottage she stubbornly occupied and longed to hale her from it into a palace. As he walked home his heart warmed to all the little cottages, most of them dark and cheerless, and he longed to change all these to palaces, too. He felt sorry for the poor, tired people that lived so humbly there and slept now but to rise in the morning to begin moiling again.
Sometimes from his office window he surveyed the long lines at the pay-windows and felt proud that he could pour so much treasure into the hands of the poor. If he had not schemed and borrowed and organized they would not have had their wages at all.
But now he wished that there might be no poor and no wages, but everybody palaced and living on money from home. That seemed to be the idea, too, of his more discontented working-men, but he could not imagine how everybody could have a palace and everybody live at ease.
pp 235-236 : link